During your tour of the cathedral, you will be surprised by the extraordinary architectural unity of the building. Built and decorated between 1134 and 1260, registered by UNESCO as a World Heritage Site, it is the most complete and best preserved of the Gothic cathedrals. From disastrous fires to resolute rebuilding, you will discover the richness of its history and will appreciate the passion of the local inhabitants and their bishops to restore numerous reversals of fortune. This is the story...

The time of the first cathedrals

Evangelised early, while Gaul was still Roman, the city of Chartres had a bishopric by the 4th century. It is supposed that the first edifice, of which we have no trace, dates from this period. In 858, the Vikings destroyed the cathedral, which was nonetheless rebuilt almost immediately. Of this edifice of the 9th century remains the crypt of Saint-Lubin. In 876, Charles le Chauve bequeathed the relic of the veil of the Virgin, and thereby consecrated Chartres as a great center for pilgrimage.

On September 7, 1020, a fire destroyed the cathedral. Bishop Fulbert built a vast new structure, of which the principal crypt (1020 - 1024) remains today.

In September 1134, a large part of the city was devastated by a fire which nonetheless spared the cathedral. The houses that were destroyed in front of the structure opened up the possibility of building a new façade, While significantly lengthening the nave. The base of the north tower was begun at that time. Around 1145, the construction of the Royal Portal and the south belfry (the Vieux Clocher) began. The construction of the facade was completed towards 1150, the south tower towards 1170.

In June 1194 a fire ravaged the previous building, destroying the framework and leaving only the crypt and part of the western façade intact. After believing the holy relic lost, it was found, as Priests saved it by hiding it in the crypt during the conflagration. Bishop Renaud de Mousson, the first cousin of king Philippe Auguste, decided to undertake an exceptional rebuilding project using the new techniques of the time - Chartres cathedral was to become one of the first great Gothic cathedrals. The work is, in itself, an absolute record. In 1221, the structural work was completed. It took only a quarter of a century to realise this extraordinary work, with its sculpted decorations (the portals and porches of the transept in particular). Most of the stanined glass windows date back to the same period. The cathedral was consecrated in 1260.

From the 18th to the 19th centuries

The jube (the screen between the choir and the nave) was demolished in the 18th century and shortly afterwards the choir was completely redecorated. The marble statue of the Assumption was added at that time.

In June 1836, a fire destroyed the wooden framework and the roof lead. The framework was replaced by an iron frame and covered in copper, which quickly obtained its verdigris colouring of today. 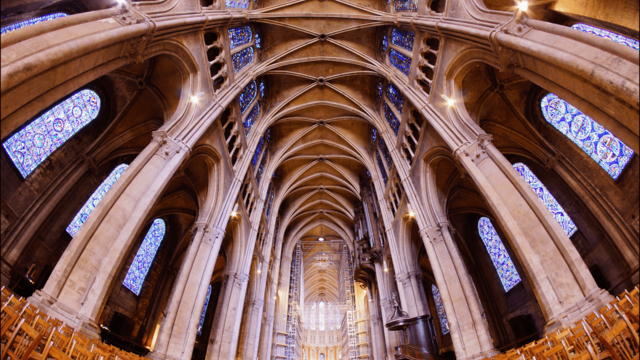 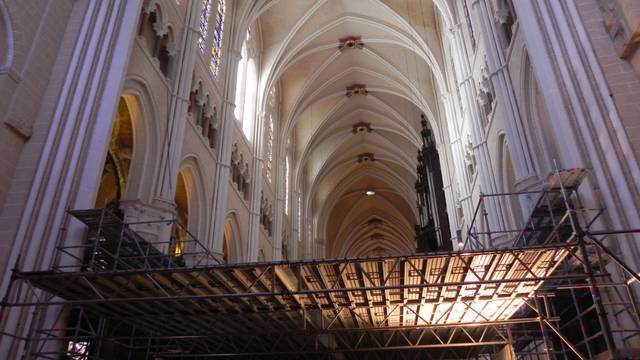 Since 1994, a restoration campaign has been rediscovering the interior decoration as it was conceived in the 13th century. 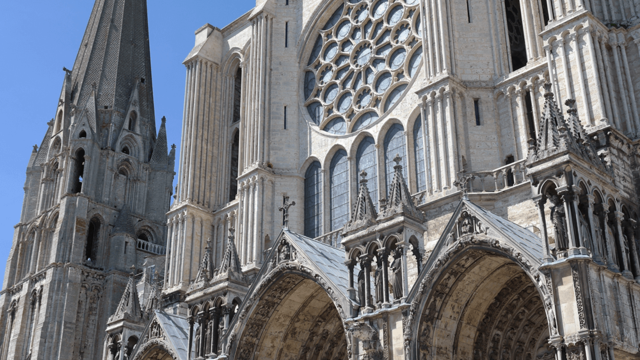 The cathedral's builders: the trades

Built in a surprisingly short time, Chartres cathedral is the work of a horde of anonymous builders, masons, stone cutters, carpenters and sculptors.